Designer of mascot: Liu Bo,professor of the China Academy of Art 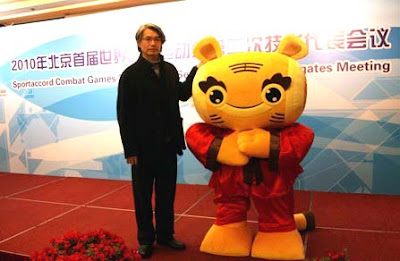 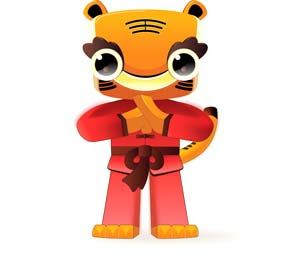 The mascot of Sportaccord Combat Games 2010 Beijing sets the “Tiger”and “Drum” as the core creative element. It is well-known that this year is the Tiger Year in traditional Chinese 12 animal sign of the zodiacs. In ancient China, people called brave soldiers as “tigers”. It presents the time-the year of holding the Sportaccord Combat Games for taking the Tiger as the designing element. Also, the cultural connotation of “the soldiers as fierce as tigers” can deliver the spirits of all the participants. Drum is Chinese traditional percussion instrument. In ancient time, it is widely used in battlefield and different kinds of holiday and celebrities. The function of it is to encourage troop moral and set the atmosphere. Setting Drum as the design element of emblem, it can not only show the Chinese traditional trait, but also it presents the feeling of keep-fighting for the participants, and the happy feeling for the Sportaccord Combat Games because of the beating of drum “Dong Dong”. The design of mascot “Dong Dong” reflects the emblem “GU WU DONG FANG”. The entire design of mascot adds Chinese ancient folk art, which made of cloth. The sculpt feature of the mascot-cloth tiger matches the drum feature in Shang Dynasty, which is square bottom and round drumhead. The mascot is full of Chinese characters.

“Dong Dong” is homonymic with the beating of drum “rub-a-dub”. It is catchy to read. And the overall design and sculpt echoes the mascot. “Dong Dong” has a square figure which can show his strong body. His bright and piercing eyes and smiling face fully represent his confidence, vividness and energy. The design shows that the host country-China is positive, optimistic, healthy and inspiring. “GU WU DONG FANG”is the continue of the national spirits.

and the old try 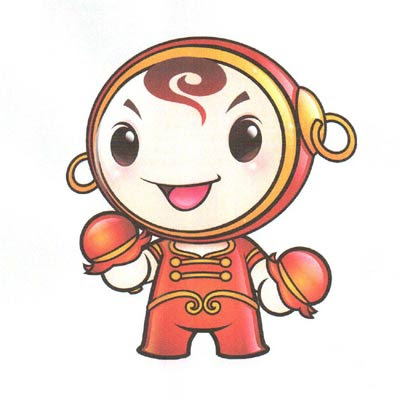