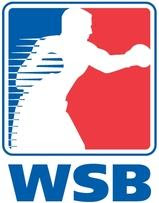 Ushering in a new era in the sport, reuniting the broader boxing world and its grassroots amateur foundation, the World Series of Boxing provides a bridge between Olympic boxing and professional boxing. WSB will help the sport of boxing reclaim its noble position and heritage at all levels.

The competition format will consist of team and individual championships. Teams of a minimum of 10 boxers will represent 12 cities from three regional conferences: Asia, Europe and the Americas.

The team competition involves six home and six away matches per season and concludes with a play-off series featuring semi-finals and the team finals.

Individual championships will take place after the team competitions. The top 2 ranked boxers from each weight category will compete in a title bout to crown the individual WSB World Champions.
WSB matches will not use head-guards or vests in the competition format.


As the IOC-recognized world governing body for boxing, with 196 national federations, the International Boxing Association (AIBA) has formed World Series of Boxing SA (WSB SA) a limited company registered in Switzerland. Owned 75% by AIBA, who have entered into a comprehensive commercial partnership with IMG, the world’s premier sports, entertainment and media company, and holder of the remaining 25% equity.

This partnership will combine AIBA’s expertise and authority in world boxing and sports management with IMG ’s sports marketing expertise, global reach, and extensive media rights business knowledge in order to help ensure that the World Series of Boxing reaches devoted boxing fans around the world.

The company was established to own all of the commercial and other rights relating to WSB. WSB SA will have its own management structure that will oversee the development and global promotion of WSB as a whole, as well as managing the day-to-day relationships with the franchisees.

With its headquarters in Lausanne, WSB SA will seek to bring world-leading governance and commercial guidance and leadership to WSB and its family of stakeholders.
Avtor French boxing ob 2:54 AM