Japan’s government has voiced anger over two cartoons published by a French newspaper depicting sumo wrestlers with extra limbs in front of a crippled Fukushima nuclear plant and a radioactive pool, linking them to the 2020 Tokyo Olympics.

"This cartoon hurts the feelings of those who suffered through the great east Japan earthquake," Japan’s Chief Cabinet Secretary Yoshihide Suga said at a press briefing on Thursday.

He referred to the March 2011 earthquake that triggered a tsunami which damaged three of the Fukushima plant’s reactors. The incident led to a nuclear disaster with the plant accumulating radioactive water ever since. The disaster forced the evacuation of about 160,000 residents within 20 km of the plant, and thousands more just outside the official contamination zone made their own decision to flee

An official complaint will be lodged with the weekly paper Le Canard Enchaine through the Japanese Embassy in France, the government spokesman added.

One of the cartoons carried in the satirical newspaper on Wednesday showed two SUMO wrestlers with extra legs and arms competing in front of the crippled nuclear plant with a sign reading "Marvelous! Thanks to Fukushima, sumo is now an Olympic sport." 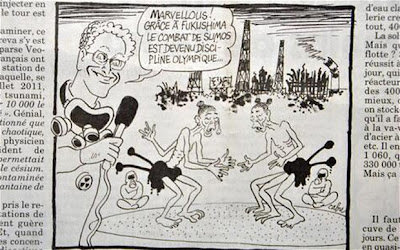