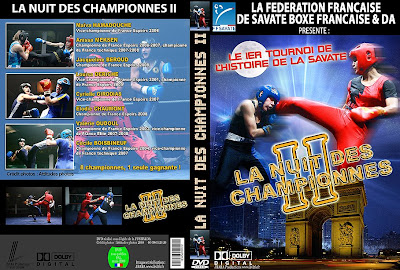 On November 8 at the Salle Japy in Paris was the first tournament Savate French Boxing Women - "The Night of Champions".
For the first quarter-final this evening, Louisa Derriche from Levallois and Cécile Boisbineuf from Lyon opened the event. In this fight of good technical level, both fighters were in close combat until the end of the game and Louisa Derriche more technical and more combative in this meeting.

In the second quarter finals, Cyrielle Girodias from Levallois met Elodie Chaumont from Vandoeuvre. This is a young fighter who has done an excellent job last year in France on a "Championship of young hopes". She did perfect hand technique.

In this confrontation, Elodie Chaumont tried to work half-distance, using her hands but Cyrielle Girodias more accurate continued to work on a distance until the end of combat. This was a victory for points, by unanimous judges decision.

Finally, in the last quarter-final, Valerie Oudoul Issoire has failed to pass the barrier Beroud Jacqueline Lyon. The battle was strong and accurate and efficient work of Jacqueline Beroud made the impression.

Second part of the evening: the first semi-final between two women - (club Levallois), Louisa Derriche and Cyrielle Girodias. Louisa Derriche was better during the second round and made troubles to her opponent with effective hand techniques. In the third round, Girodias Cyrielle has increased its work on legs techniques and scored points necessary to enter the next fight. She reached finals with unanimous decision of judges.

The second semi-final fight was one of the best fights of the evening! Anissa Meksen champion of France, Europe and the World, repeated attacks against Jacqueline Beroud, "new champion of France 2008 "Young hopes". She won her fight by unanimous decision of judges.

For the end of the show, the ultimate confrontation has opposed Anissa Meksen and Cyrielle Girodias. Two young women both wanted the final victory. During this struggle, Anissa Meksen showed all her explosiveness, but careful against Cyrielle Girod. The battle was very tight during the first two rounds with a slight advantage for Anissa Meksen who was more precise. For the final-third round of the evening, fighters saved their last strength but they spent it also very quickly. Anissa Meksen finally won the final tournament and the first by a majority decision of the judges.