Go on Portugal with FISU savate. Go on. 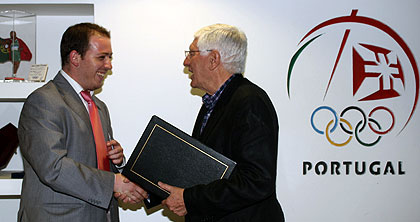 LISBOA - The Portuguese National Federation of University Sports (FADU) and the Portuguese Olympic Committee (COP) signed a cooperation protocol for the organization and participation of the Portuguese delegation at the Shenzhen Universiade in 2011. The protocol signing took place on May 28th at the headquarters of the COP, attended by presidents and representatives of various National Sports Federations, moments before to the Plenary Assembly of the COP for the Approval of Annual Report and Accounts 2009, which was approved unanimously.

This protocol of a unique importance has recognized the value of representations and the development of international sports and Portuguese sports sector in all its dimensions, with emphasis in University Sports. This will represent important steps in the growth of University Sport and its full integration in national sports projects.

Commander Vicente Moura, President of the Portuguese Olympic Committee, refers the gaining credibility and increasing affirmation that FADU has done in University Sports, thanking for all of the work done on behalf of Sport.

Luis André Couto, President of FADU, thanked the commitment of the Commander and the COP in catapult and affirm the University Sports as a sports reality reference, stating that this is one of the first steps that the National Sports System is being recast, creating a strategy for developing national sport which includes the University Sport and School Sports.

This was also the state of the Universiade as the greatest sports moments in which Portugal is present and should be increasingly giving credibility and a genuine national representation of national public interest.

A special word of appreciation to the COP and its President, Commander Vicente de Moura, for believing in this project and developing the national sport can come from cooperation between the institutions.”