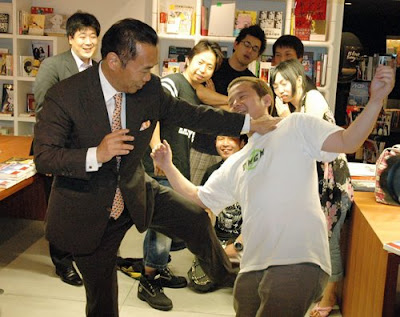 Powerful K-1 founder Ishii held a fan event in Shibuya in Tokyo today. He said that he doesn’t have any intentions to become K-1 producer again. Instead, he will put all his power into a new amateur organization called International K-1 Federation (FIKA). He wants to especially advance into Europe. He says that there are a lot of strong fighters in Greece. He wants to hold K-1 events in Europe from now on in order to have it erupt there.

He also talked about the K-1 World Cup which there has been talks about for some years now. He said that they will be able to have 32 countries for their first one, compared to 7 which soccer/football had in its first World Cup (he means that the first K-1 World Cup will be at a larger scale than the first football world cup, which is now the biggest). This is also part of FIKA.

Is he saying that by having two big japanese organizations its harder for them to fight off a UFC invasion?

And how/what could he do to make the two sides merge?
I know he had power once but does he have any leverage to pull this off?

As for k-1, I get wanting to associated your product to an event like the World Cup but the great thing about international sports like soccer, basketball, volleyball, handball and so on is that the two year of qualifications before the final event are part of the buildup and excitement. Still, there is enough kicking martial arts around the planet that it could work but it seems like kickboxing also has too many “world” events and instead of this being the ultimate, it ends up being another belt with the word “world champ” on it. Dont they have a K-1 World Grand Prix series that culminates in the K-1 World GP 2009 Final 16? They had an event last month in in Łódź, Poland – I thought kickboxing was pretty big in europe and not some unchartered wilderness (Shades of the american “we brought basketball to the world in 1992.”??). And I must confess, this is the first time I hear that greece is a kickboxing hotbed.

But he is right about working on the amateur side. You dont become a world sports by having no basis, no foundation. Its not sexy as promoting pro fights but building national and international federations is part of the process for being a recognized sport and its a long term project that’s gonna demand lots of work.
Avtor French boxing ob 6:34 AM