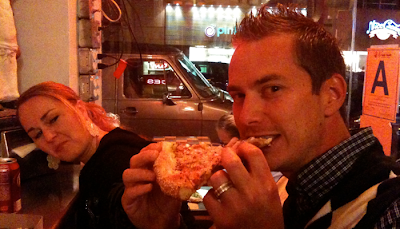 Ran in to Jeff Conley, Vice President of the United States Savate Federation, at Abbott’s Pizza in Venice. He was accompanied by his lovely wife Amy and they consented to this impromptu iPhone photo.
Jeff recounted the USSF’s role in the recent election of Gilles Le Duigou as President of the International Savate Federation and it’s activities in encouraging European savateurs to visit the U.S. for tournaments and seminars.
You can train with Jeff and other LA based savateurs on Saturdays at 1pm in Santa Monica. Francis Echinard conducts Savate lessons outdoors at 4th Street and Hollister.

LIKE YOUR STYLE. IN THE SAME SHIT WE ARE IN EUROPE. NEIGHBOR COUNTRIES DON'T WANT TO COOPERATE. WE DON'T HAVE ANY OPEN ASSAUT CHAMPIONSHIPS. AND MOST OF THE PEOPLE WE ARE LOOKING IN SAVATE ARE PEOPLE FROM KICKBOXING. EVERYWHERE THE SAME STORY.
AND AGFIS - YES - THIS YEAR IT WILL BE FOR SURE. THEY PROMISSED :)
Avtor French boxing ob 5:45 AM