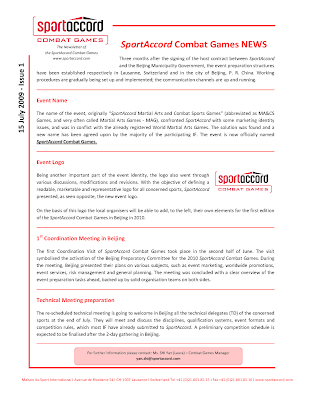 Three months after the signing of the host contract between SportAccord and the Beijing Municipality Government, the event preparation structures have been established respectively in Lausanne, Switzerland and in the city of Beijing, P. R. China. Working procedures are gradually being set up and implemented; the communication channels are up and running.
Event Name
The name of the event, originally “SportAccord Martial Arts and Combat Sports Games” (abbreviated as MA&CS Games, and very often called Martial Arts Games - MAG), confronted SportAccord with some marketing identity issues, and was in conflict with the already registered World Martial Arts Games. The solution was found and a new name has been agreed upon by the majority of the participating IF. The event is now officially named SportAccord Combat Games.
Event Logo
Being another important part of the event identity, the logo also went through various discussions, modifications and revisions. With the objective of defining a readable, marketable and representative logo for all concerned sports, SportAccord presented, as seen opposite, the new event logo.
On the basis of this logo the local organisers will be able to add, to the left, their own elements for the first edition of the SportAccord Combat Games in Beijing in 2010.
1st Coordination Meeting in Beijing
The first Coordination Visit of SportAccord Combat Games took place in the second half of June. The visit symbolised the activation of the Beijing Preparatory Committee for the 2010 SportAccord Combat Games. During the meeting, Beijing presented their plans on various subjects, such as event marketing, worldwide promotions, event services, risk management and general planning. The meeting was concluded with a clear overview of the event preparation tasks ahead, backed up by solid organisation teams on both sides.
Technical Meeting preparation
The re-scheduled technical meeting is going to welcome in Beijing all the technical delegates (TD) of the concerned sports at the end of July. They will meet and discuss the disciplines, qualification systems, event formats and competition rules, which most IF have already submitted to SportAccord. A preliminary competition schedule is expected to be finalised after the 2-day gathering in Beijing.