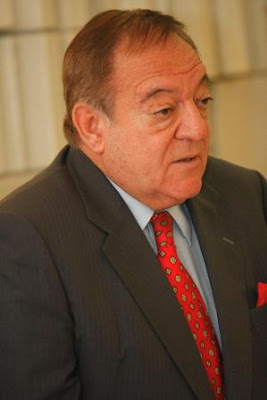 He is also Vice President of the General Association of International Sports Federations (GAISF).[2]

In 2010 he received the Olympic Order on February 28, 2010, in Vancouver, British Columbia, Canada, this is awarded to individuals for particularly distinguished contribution to the Olympic Movement.[1]

HOW THIS THINGS WORK...

The Hungarian team closed the 1st SportAccord Combat Games with great success in Beijing. During the press conference of the Hungarian National Confederation (NSSZ) dr. Tamas Ajan (in the picture) vice-president of SportAccord also congratulated for the results.
Dr. Janos Meszaros the vice-president of NSSZ and president of the Hungarian Karate Federation emphasized that this was a great achievement for the Hungarian team to get to Beijing and the results speak for themselves. According to dr. Richard Leyrer, president of the Hungarian Kickboxing Federation and vice-president of NSSZ the Chinese organized a fantastic world event and was happy that all seven kicboxers brought medals home.
Dr. Tamas Ajan, vice-president of SportAccord pointed out that there is a need for common world events of the different kind of sports. In connection with the sports outside the Olympics dr. Ajan said: "Budapest has a good chance to organize the Games in 2017.”
Our kickboxing fighters did really well because they got one gold, three silver and three bronze medals. Krisztian Jaroszkievicz (semi-contact 84 kgs) got the gold medal and this result can be considered as a historical event because this is the first Hungarian gold medal at the Combat Games. Gabor Gombos, Zsolt Moradi, and Gabor Gorbics got silver medals, Richard Veres, Tamas Imre and Barbara Szendrei got bronze medals.