Marina Horvat and Matija Godinic - (also pair in private sport life) said for Croatian media that they didn't have fights on a national Croatian combat savate championship 2011.
I think that this situation was caused by propositions for a National boxing championship 2011 by Croatian boxing federation. All boxers (english - AIBA) had to sign that they don't compete in any other Martial arts or Combat sports federations on a national or international level.
Marina is probably very dissapointed because she expects that these regulation will also come to Croatian women boxing which is now regulated by Miljenko Rozmaric - selector both of english women boxing (AIBA type) and savate - french boxing - combat national savate team (FIS - type).
And if this continue ... will Croatian savate disappear?
Probably Marina will decide like Ida Kovacic before for an english boxing. It is an olympic sport, much better organised and financed ... and competitors choose.
What about Miljenko? Will Croatian boxing federation still allow also trainers and selectors ((producers)like Rozmaric)to produce both side fighters (savate- french boxing and english boxing at the same time) ? We wait for another regulation also from the FIS - savate side not only AIBA. 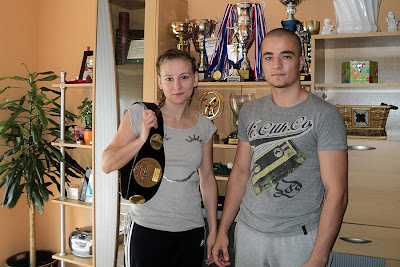