In Dubrovnik, Croatia and neighbour countries police and special troops USKOK in a big action against organised criminal - narco-mafia in Serbia, Montenegro and Bosnia and Hercegovina which resulted in many famous arrestments. MMA fighter Ajlin "Ico" Ahmic was arested in Sarajevo (capital of Bosnia) but his house in Dubrovnik (Croatia) was ivestigated during the action. Mr. Ajlin was and old friend of WFC (world freefight challenge - www.wfc.si) - Slovenian so called professional fight organisation 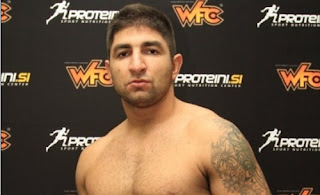 I think that At UFC 159 -- Jones vs. Sonnen on April 27 in New Jersey, UFC light-heavyweight champion Jon “Bones” Jones will defend his crown against Chael Sonnen. despite any size Sonnen has put on in training, despite his toughness, he’s going to be encountering an athlete who is bigger, stronger and faster than he is, and those traits will be insurmountable in the fight. And I hope the win to Sonnen