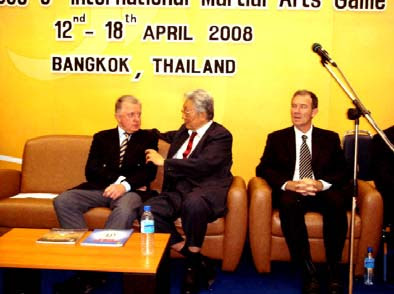 Amid the great concerns and expectations of the world sports and martial art circles, the 3rd International Martial Art Games was held at the Asian Games Village in Bangkok, Thailand from 12th~18th April 2008 by the World Muay thai Federation under the supervision of the IMGC. This Games is of great significance for marking the turning points in world martial arts movements and improving the cordial collaboration between the martial artists and the international martial art organizations the world over.
The 3rd International Martial Art Games, followed by the 1st and 2nd IMGs held in Pyongyang, showed the rapid growth and development of the IMGC to the world with the attendance of 400 participants from 42 different countries and 10 International Martial Art Federations in Taekwon-Do, Karate, Muaythai, kickboxing, Kung-Fu, Oriental, Haedong Kumdo and Tang Soo Do, Jendo, Kurash and Squay.

Opening Ceremony
The Opening Ceremony of the 3rd IMG was inaugurated at 4 o’clock on 12th April, 2008 at 5th stadium of Asian Games Village in Bangkok, Thailand.
In the ceremony, attended over 400 members of 10 International Martial Art Federations and NMGCs in the IMGC from 42 countries and regions including the athletes, coaches, umpires and officials, and Prof. Chang Ung, Hon.

President of IMGC and Member of IOC, and other presidents of the IFs were invited as the Guests of honor. The most highlighted view in the ceremony was the attendance of Dr. Hein Verbruggen, President of GAISF by the personal invitation of Prof. Chang Ung, that the IMGC could have the opportunity to impress upon the International Sports society with its true and real feature as the International integrated martial art entity.
There was the parade of the attendants country by country at English alphabetical order and followed the declaration of the opening of the 3rd International Martial Art Games by Dr. GM Leong Wai Meng, Secretary General of IMGC.
After his announcement, there was the Kindling of the torchlight with the flame which had been conveyed from Pyongyang, the birthplace of IMGC among the enthusiastic cheers of the attendants.
Displayed in the ceremony were the demonstrations of martial arts,
Taekwon-Do from D.P.R of Korea and Kung-Fu from Islamic Republic of Iran. The ceremony was closed by the beautiful performance of the Thai traditional dancers.

2. Competitions
Competitions of various martial art categories began on the 14th of April 2008 at 5th stadium of Asian Games Village in Bangkok, Thailand.
In the 3rd International Martial art Games, the competitions of the martial art categories; Taekwon-Do, Karate, Muaythai, Oriental, Kung-Fu and Kickboxing were conducted in 80 different divisions i.e.
weight categories, patterns, sparring, self-defense techniques, individual and team competitions under the rules of the respective IFs.
All the athletes showed the thrilling and touching scenes with their high techniques and moralities through the tournaments
Number of Divisions according to the Martial Art categories
﻿No Events No of Divisions
1 Taekwon-Do 19
2 Karate 14
3 Muaythai 15
4 Kung-Fu 10
5 Oriental 9
6 Kickboxing 13