Big step forward for student sport and of course SAVATE. 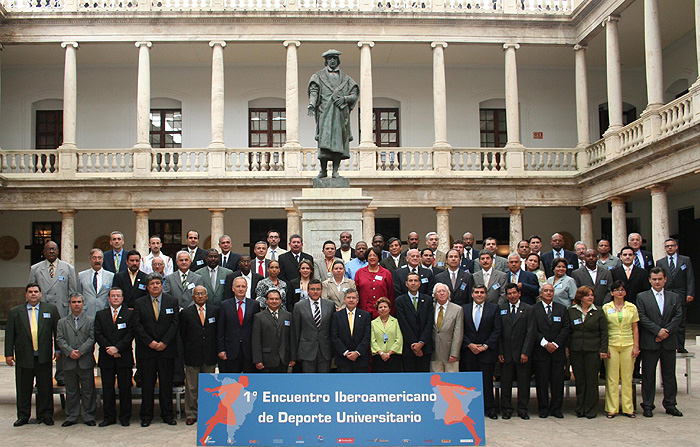 High Participation Level at Inaugural Conference
Together with the Spanish Committee of University Sports, Universitat de València has organised the 1st Latin American University Sports Conference, to be held from Tuesday 8th to Wednesday 9th July at the university's historic building.

The conference has never been held before. For the first time in history, university leaders from Latin America come together to discuss about university sports. Participation in this first meeting has been really successful, with almost a hundred delegates from 27 countries from Latin American and The Caribbean and top representatives from the Spanish Higher Council of Sports, the Regional Secretariat for Sports of Generalitat Valenciana, and the Sports Department of Valencia Council.

In the two-day congress, speakers will share presentations and reports in an attempt to strengthen bonds between sports leaders in Latin America, in countries which already share the same language and culture.

The 1st Latin American University Sports Conference is sponsored by Grupo Santander, Universitat de València via its commission Una Nau de Solidaritat, Fundación Divina Pastora, the Council of Valencia, the Regional Government though the Valencian Sports Council, and the Higher Council of Sports.

More than 20 Presentations
Since the goal of the conference is to delve into the situation of sports on both shores of the Atlantic and to share experiences, more than 20 presentations have been scheduled.

The conference was officially opened on Tuesday, July 8th, at the main hall of La Nau, an emblematic university space. Photographs were taken afterwards at the cloister. The first presentation was that of ODUCC (Organización Deportiva Universitaria de Centroamérica y el Caribe), one of the three Latin American sports associations. The speakers were Sonia Stapf and Guno Rudge, the vice-president and the secretary-general, respectively. They explained the operation of ODUCC, an association founded in 1970 in San Juan (Puerto Rico) comprised of university sports organisations or federations from The Caribbean and Central America. They were followed by the representatives of the member countries of ODUCC at 12h30, who presented reports to describe the situation of sports in their countries.

The second session, scheduled at 17h00, started with a presentation by the president of the South American University Sports Organisation (COSUD), the Brazilian Alim Maluf, who talked about this structure. Presentations by other members from this organisation followed.

The Wednesday session started with a presentation by Julio Jakob, the president of ODUPA (Panamerican University Sports Association). After his description of the situation of Latin American sports, it was the turn of Spanish sports with interventions by the Higher Council of Sports, Universitat de València, and two organisations that strongly support university sports, Universia and Fundación Divina Pastora.

At 11h00, the first lecture, by Eugenio Jiménez, the president of the Valencian Federation of Adapted Sports, invited by Fundación Divina Pastora, focussed on adapted sports in university.

At 12h.00, Pilar Díez Baquero, head of the International Cooperation Service of the Higher Council of Sports, analysed Spanish cooperation through programmes with Latin America.

The Vice-Rector for Culture of Valencia University, Rafael Gil, finished the morning session with a presentation about the situation of university sports in Spain.

At 17h.00, Inmaculada Santos Bermejo, the director for Coordination and Planning with Latin America in Universia, gave a talk entitled 'Universia in Latin America: university sports programmes'. Universia is the largest university network in the world. It participates in the conference because its philosophy favours Spanish and Latin American exchanges. Set up in 2000 with support from the Santander Group, the Conference of Spanish Rectors, the Higher Council for Scientific Research, and most of the Spanish universities, Universia already includes 1,070 educational institutions from 11 countries (Argentina, Brazil, Colombia, Chile, Spain, México, Peru, Portugal, Puerto Rico, Uruguay and Venezuela), totalling 10.9 million students and lecturers.

The meeting was closed by Albert Soler, Director General for Sports of the Higher Council for Sports, who outlined Spain's sport strategies.
Avtor French boxing ob 3:20 AM