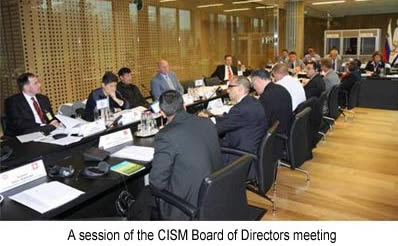 During Mr. Kocjancic (skiing) presidency of Slovenian Olympic Committee, savate as a sport was treated as a recreational activity since 2003. Andreja Kocjancic his wife as a chancellor of University in Ljubljana also regulated student sport as a president of Ljubljana student sport association.
But from now on things will change. Don't worry. 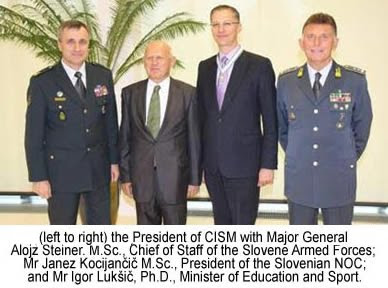 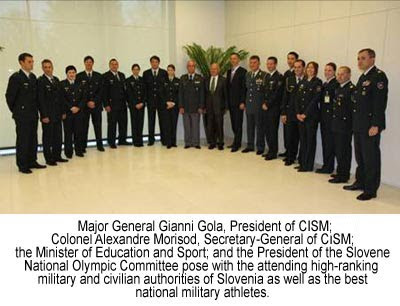 The Slovene Delegation hosted the third meeting of the CISM Board of Directors in 2009 in Brdo (20km from the capital Ljubljana) on 3-5 November. The meeting was held in the superb Conference Centre built for the purpose of the Slovene Presidency of the EU during the first half of 2008. It goes without saying that the working conditions enjoyed by our representatives were perfect in all respects.
The Slovene Delegation, led by Brigadier General Obreza, joined CISM in 1992 and has demonstrated its involvement in our activities on multiple occasions since. The highest military and civilian political authorities of Slovenia accepted the invitation to attend the Opening and Closing ceremonies. The Opening Ceremony provided our President, Major General Gola, our Secretary-General, Colonel Alexandre Morisod, and the members of the BoD, with an opportunity to hold talks with Major General Alojz Steiner M.Sc., Chief of Staff of the Slovene Armed Forces, with the Ministers of Defence and Education & Sport and the President of the Olympic Committee.
This ceremony resulted from the desire of the organisers to encourage multiple synergies among the different stakeholders of the military and civilian sport spheres. This was how military sport leaders, accompanied by the best Slovene military athletes, met with the representatives of civilian sport in Slovenia under the leadership of the President of the National Olympic Committee. Hopefully, this experiment will enable them to strengthen existing cooperation schemes.
The agenda of the sessions of the Board meeting included many items debriefing CISM activities in 2009 while preparing the next several years. Other significant issues discussed during the meeting included the review of the CISM solidarity programme, an analysis of the outstanding achievements of the Regional Development Centres (located in Nairobi and Rio), the review of the operating modes of the CISM Commissions and the election of a number of Presidents of CISM Sport Committees.
Since the meeting coincided with the National Day commemorating the end of the First World War in Italy (4 November), the Board Members were invited by the Italian Ambassador in Ljubljana to attend an official remembrance ceremony which struck us as both solemn and decidedly positive and forward-looking.
In his closing address, our President underscored the enthusiasm of the Slovene Armed Forces when it comes to defending and promoting CISM’s ideals of Friendship through Sport.

Savate in Slovenia is like a small disturbance in a house of cards. And they now it. And you can think for yourself.
Avtor French boxing ob 12:08 AM