International sports federations and associations will take an active part in the first World Martial Arts Games next year, said Hein Verbruggen, the President of the General Association of International Sports Federations (AGFIS) in northeast China's Harbin on Wednesday afternoon.
Verbruggen made the comments during his meeting with Liu Peng, Minister of the State General Administration of Sport, in northeast China's Harbin on Wednesday afternoon. He had been invited there to attend the opening ceremony of the 24th Winter Universiade in the evening.
The World Martial Arts Games were first initiated by Verbruggen to promote martial arts worldwide. According to Verbruggen, 13 members of AGFIS have already confirmed their participation in the Games, including the Wrestling, Judo and Taekwondo Federations. Wushu, the "national martial art" of China, will definitely be an important part of the Games, he said.
Verbruggen said AGFIS has approved an application from the International Wushu Federation to increase the number of qualified athletes. Attendance was previously restricted to 80 to 90 participants – including referees, working staff and athletes - for each discipline.
Liu Peng thanked Verbruggen for his efforts in popularizing martial arts. He maintained that China would not participate in all the disciplines, and had worked to encourage athletes from other countries and regions to vie for the gold medals.
At the Wushu tournament during the Beijing Olympic period, China sent athletes to only 8 of the 15 disciplines. This would benefit the development and popularization of Wushu, explained Liu, and therefore improve the prospects of Wushu becoming an Olympic sport. He promised the Chinese Olympic Committee would be unremitting in its effort to promote Wushu and make it an international treasure.
A technical team from AGFIS inspected Beijing in January and gave the city a high rating for its preparation work towards hosting the Games, said Verbruggen, adding that Beijing has accumulated abundant experience during last year's Olympics and Paralympics and will make full use of the Games' legacy.
AGFIS has established a back-up department for the Games and will broadcast the competitions around the world.
Hein Verbruggen was awarded the Friendship Award by the Chinese government on February 17 for his outstanding work as the Chairman of the International Olympic Committee (IOC) Coordination Commission for the Beijing 2008 Olympic Games. 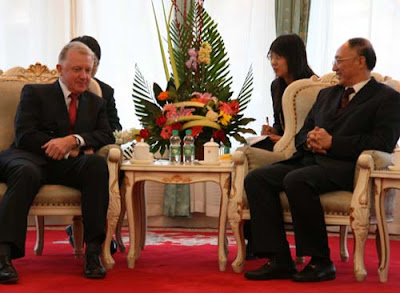