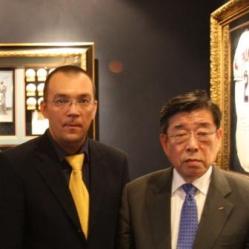 On July, 15 Secretary General of the Multisport Association of Russia, Alexey Kylasov, had an official working meeting in Seoul with the founder of the International World Games Association (IWGA), former president of the World Taekwondo Federation and the IOC vice-president Un Yong Kim.

‘The meeting with Un Yong Kim took place in the sport bar of baseball legends of “Lexington” hotel in the heart of Seoul near the National Assembly – Parliament of Republic of Korea’, noticed Alexey Kylasov. ‘Baseball was one of the sports the international federation of which became a founder of the IWGA. Looking around Kim said, ’Here we had our first meeting in 1980 when we had the idea to hold the World Games’. Later Kim said that the expenses on keeping the new organization office were paid by the United States Olympic Committee. It is worth mentioning that the IWGA office is still provided for by the USOC and it is situated in the USOC headquarters in Colorado Springs. ‘In fact, the American paid the organization of the first World Games and suggested to hold the Games in 1981 in the small town of Santa Clara in California’, said Kim.

Of course, we met not to share memories about the past but to discuss the prospects of the World Games development. I informed Kim about the refusal of the city of Duisburg (Germany) where the 7th World Games were held in 2005 to host the 9th World Games 2013. It became known from IWGA President Ron Fröhlich’s letter to the multisport Association of Russia in which he suggested that a Russian city should host the Games. Unfortunately, neither Moscow nor Saint Petersburg showed any interest in the offer. And now the IWGA executive committee in Kaohsiung (Taiwan) has to choose the city out of just two candidates – from SAR and Colombia right during the VIII World Games. It was very interesting the way Un Yong Kim reacted. he expressed himself exquisitely saying that both SAR and Colombia are not “comme il faut”. In his opinion, in SAR the Games won’t be noticed because of the FIFA Cup and in Colombia it is not reasonable to hold anything because the flight to Colombia is too expensive for most participants and, besides, it is just not safe there. Kim considers that in this situation it is high time for Fröhlich to admit the IWGA administration inconsistent. Kim and I agreed on the following: absence of applications from candidate-cities is connected with the fact that the Games haven’t become interesting to TV and consequently to sponsors. Kim reminded that some time before former IOC President Juan Antonio Samaranch had sincerely declared that the IOC was bankrupt, though of course nobody was going to declare it legally. For Fröhlich the situation is even easier. It is possible to blame the global financial crisis. Many people do it now to get away with their strategic mistakes.’
Alexey Kylasov expressed the opinion that one of the mistakes of the IWGA administration was the absence of national organizations integrated with the head organizations and established according to the head organization principle. To Alexey Kylasov’s surprise Kim said that it had been conceived initially. Kim planned to create the network by the national committees but his successor never worked in that direction. As a result there appeared a chimera. In some countries such organizations have been created, e. g. Lithuania, Ukraine, Japan, but their activities stop at NOCs. IWGA does not work with those organizations directly. The only exception is the national Olympic Committee of Germany which unites all the sport federations.