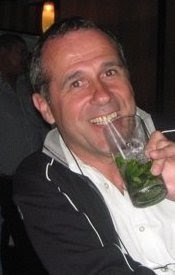 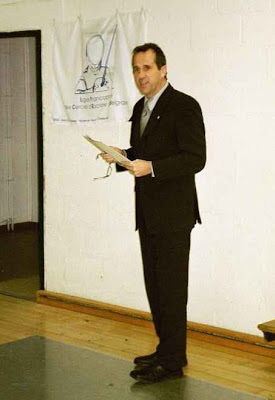 "From my short experience in the world of Savate - eighteen years – I can tell you that this man is a work-a-holic, demanding all while remaining approachable and attentive to each. It is clear that Savate would not be what it is in the Tournai area, in Belgium or internationally if Alexander WALNIER had not worked this way. Few people are able to bring together so many volunteers for a project set up and often conceived by himself and by those he works with. This is one of the character traits of this man, who is gifted, intelligent and perceptive in his actions. Without saying everything, Belgian Savate owes him a lot!"

Alain Piette, President of the Belgian Royal Federation of Savate

Alexandre WALNIER was born in Tournai on 28th April 1957. He gained a Masters degree in the Management of Sports Organisations (MEMOS) after working closely with the International Olympic Committee at Lausanne in 1997, and after having successfully followed the Belgian Olympic Academy in 1992.


Boxe française; his sport, his life!
Directed to this sport by Michel MATTEZ – his physical education teacher - he soon became a coach with ADEPS* and was a federal instructor at the age of... 21 years. He created his club three years earlier. The Tournai school of Savate was established at the Notre Dame Institute before moving to the Lycée Royal, Saint-Piat, where it had 130 members. .. and the CET sports hall. Alex WALNIER also ran the Templeuve and Mouscron clubs.

In 1980, he became secretary of the French-speaking federation and technical director, posts that he has occupied since. In 1985, he became General Secretary of the International Federation, and stayed in post until 2001, when he was elected International President to replace Michel Roger. He had already been President of the Competitions Commission since 1991. He held these posts until September 2003. At the Belgian Federation, he was President for six years before handing over Ivan Umek, and currently to Alain PIETTE. He has organized fourteen World and European Championships in Belgium since 1984.

Administrator of the Olympic Committee and AISF!
President of the Hainaut Olympic Committee since 1993, he was a member of the Belgian Inter-federal Olympic Committee (COIB), where from 1997 to 2001, he was on the board of directors. He is still a COIB administrator, and member of the Selection Commission for the Turin and Beijing Games. He attended the Olympic Games in Atlanta (1996), Sydney (2000) and Athens (2004) as well as the University Games of Fukuoka (Japan, 1995) and Bangkok (2007). Within AISF (the Inter-federal Association of French-speaking Sport), he was elected administrator and is currently the treasurer.

After developing Savate-Boxe Française in Belgium, Alexander WALNIER began his quest to travel the world and bring recognition to his sport. Since taking up the technical direction of Belgian Savate in 1980, Alexander WALNIER has contributed greatly to increasing the number of licence holders from 400 to a little more than 2500. Alex WALNIER equally wanted better international representation of our country. He wanted to put the athletes at the centre – organisers had tended to put on competitions for the show more than the sport. He was opposed to the new idea of gladiators of the ring.

Alexander WALNIER gained these results without having been a high level sportsman: he said that to be a leader, it is important to know about human resources and management. To achieve results, one should gain skills and set challenges. It is necessary to be ambitious, to want to go as far as possible not for oneself but to serve others. He has said that he believes that he could have worked as well at the international level for, say, fishing as for Savate. But good will is not enough to be a good leader. Even in the lower levels of soccer, it is necessary to have training. Athletes and trainers become more professional and have the right to expect the same of presidents, secretaries.., insists Alexander WALNIER. There is also a problem in the clubs where paid sportsmen and officials work alongside volunteers who offer free a little of their time without a requirement for precise competences.

* ADEPS is an administrative service of the Ministry of the French Community of Belgium charged with the promotion of sport and physical education amongst the population of the French-speaking community.