Under the leadership of the Italian President Gianni Merlo, the 72nd AIPS Congress held in Milano started on April 29th. As it has become a tradition over the past years, FISU was present at the Congress of the International Sports Press Association in order to enlarge the network and to inform the sports journalists about the FISU activities. Leonz Eder, Chair of the FISU Press Committee attended the Congress at the beginning while Verena Burk, Vice Chair of the CIP FISU joined the Congress later and stayed until the end.
About 350 sports journalists from more than 110 nations were present in Milan at the Marriott's Hotel. Besides FISU, the world of sport was represented by Ottavio Cinquanta, president of ISU, Gianfranco Kasper, president of FIS, Bruno Grandi, president of FIG, IAAF Vice-President Sergey Bubka, FIVB press officer Fabrizio Rossini, Hein Verbruggen, former UCI president and now president of Sport Accord, and many other officials from different fields of sport.
Russian world pole vault champion and AIPS female Athlete of the Year for the past two years Yelena Isinbayeva attended the congress also to receive her 2008 award. The two-time Olympic gold medalist who holds an incredible 26 world records was accompanied by her coach Vitaly Petrov and IOC member Sergey Bubka, the Ukrainian legend of pole vault. In a kind of talk show Yelena Isinbayeva and Marcello Lippi, National coach of the Italian football team, informed the audience about their success. In the afternoon session of the first day of the congress presentations were made by AIBA, FIVB, IAAF and the Mediterranean Games. Finally Italian football coach Marcello Lippi who led his team to victory in the 2006 World Cup, Inter Milan captain Javier Zanetti and A.C. Milan midfielder Clarence Seedorf joined FIFA's newly-appointed communications director Hans Klaus and UEFA media and communications director William Gaillard for a forum on football.
FISU EC member Leonz Eder used the opportunity to meet many of the sport leaders and sport journalists and to inform them about the FISU program. He discussed the promotion of the Winter Universiade 2011 in Erzurum with the Turkish sports journalists delegation and Turkish NOC president Togay Bayatli. 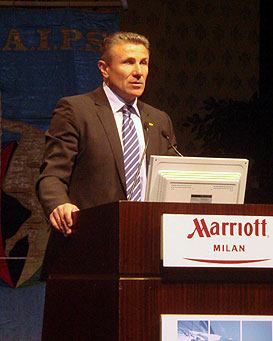 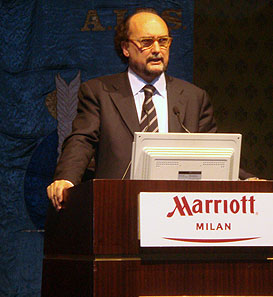 At the second day of the 72nd AIPS Congress in Milano/Italy FISU EC member Dr. Verena Burk (Vice Chair of FISU International Press Committee) attended the meetings and presentations and used the possibility to get in contact with the sports media delegates from 110 countries and with a large number of representatives of international sport organisations.
The 1st of May, 2009 started with reports from AIPS President Gianni Merlo (Italy), AIPS General Secretary Esat Yilmaer (Turkey) and Treasurer Jorge Ribeiro (Portugal). In the following elections Gianni Merlo (ITA) was re-elected for another 4 years as AIPS President. Laima Janusonyte (Lithuania), Konstantinos Vernikos (Greece), Faisal Al Qanai (Kuwait), Nickolai Dolgopolov (Russia) and Manouchehr Zandi (Iran) make up the team of Vice-presidents. Eight other members complete the AIPS Executive Committee for the next four years.
Different presentations followed in the programme. First Sebastian Coe (Chair of LOCOG) reported about the current state of preparation of London for the Olympic Games in 2012. Amedeo Ricottilli (Main Press Centre Manager at VANOC) explained to the international press the opportunities for their work at the Olympic Games in Vancouver 2010. Presentations about the Mediterranean Games in Pescara (Italy) in 2009 (Mario Pescante, IOC member and Member of the Executive of the International Committee of the Mediterranean Games), the International Ski Federation (Gianfranco Kasper, President of FIS) and SportAccord (Hein Verbruggen, President of SportAccord) followed. One of the highlights was the presentations of the bidding cities for the Summer Olympic Games 2016. Delegations from Chicago (USA), Tokyo (Japan), Rio de Janeiro (Brasil) and Madrid (Spain) showed and explained their concepts for the Games - always under the focus of their work for the international media and press. A dinner at the Sforzesco Castle in Vivevano finished the day and gave another possibility to meet people and explained them the work of FISU in the international sports movement. On the 2nd of May, 2009 the AIPS Congress continued with internal reports and discussions. A visit of the Monza Autodrome and the S.Siro Stadium for the match Inter Miland - Lazio Rome finished an interesting and informative 72nd AIPS Congress.
Avtor French boxing ob 5:04 AM

A little off topic, Guys... I have a question. Last week I found this site:
[url=http://www.rivalspot.com]Rivalspot.com - Wii Live Tournaments[/url]
They say you can play online Football game tournaments on any console for cash... had anyone tried that before? Looks like a cool idea...
Are there any other sites where you can play sports games for real moneys? I Googled and found only Bringit.com and Worldgaming.com but it looks these guys don't specialize in sport gamez. Any suggestions?

A little off topic, Guys... I have a question. Last week I trapped on this site:
[url=http://www.rivalspot.com]Rivalspot.com - Xbox tournaments for money[/url]
They say you can play online NHL game tournaments on any console for cash... had anyone tried that before? Looks like a cool idea...
Are there any other sites where you can play sports games for real moneys? I Googled and found only Bringit.com and Worldgaming.com but it looks these guys don't specialize in sport gamez. Any suggestions?