Great savate tournament in Marseilles. Thailand and Japan were also present. Strong fights in women categories. There is no mercy when your opponent serves you with full strength kick of his hardened - sports shoe. These kicks are dangerous especially for the targets like plexus, liver and head.

In Marseilles - sailors 200 years ago kicked with additional hand-grip on the floor (like capoeira) and on the wall or fence. Interesting video filmed for Human Weapons documentary.

The popularity of MMA (Mixed Martial Arts) or caged matches are gaining popularity with very young children. The State of Missouri is one of the only USA states which permits public events to take place at this time. Children as young as 6 years old train for the events. Full contact is not allowed until the age of 18.

K-1 Rules Tournament in Hungary 2007 in town of Debrecen. Ferencz József - savate fighter decided to step in ring with K1 stars, and as you see for the first time he was brilliant. Congratulations to Hungarian savate. Great job.

Thanks to Dominique Siegler for this video. See the dress (black&white) with short sleeves. Very nice.

Ju-jitsu and savate were teached hand in hand in old days. But the author of this clip didn't want to mention it. But all in all we can see brilliant retrospection through black and white eyes.

ASSP savate club from Paris, France shows us great savate duel.
Difference between combat (full contact) and assaut (light contact) fighter is just the fluidity of fight. Techniques are the same, control is perfect and Djibrine is playing with hius opponent. Great work

Legend of UFC 1, and K1 Gerard Gordeau was a competitor in French boxing - Boxe Francaise - SAVATE. Netherland is his homeland, and in 1991 he represented savate for his country. In Netherland savate team were also Mark Holland, Fred Royers, Ernesto Hoost. Oh yes Gerard is the man who finishes the last action in this video.

Savate is sport for smart and educated people, and James Southwood gives us a good example. 00:45 speaks for itself. See double chasse (piston kick)in opponent lead leg and second chasse is just a feint (trajectorie) and in a second it transforms in fouette (roundhouse kick) in a head. Slow brains cannot produce such an intelligent action, for sure. Train hard and think hard.

Did you know that Robert Paturel was former savate - boxe francaise combat champion? You can see him here in savate defense actions done by ADAC and RAID methods.

00:38 is the time when one of the fighters (blue) fell down on his knees KO, and the other (black) punched him in the head. Judges were strict. Disqualification of the black.

Savate sport differs from country to country. Savate is not about the techniques... It is philosophy of fighting it is strategy and fineness of movement. There are many fighters who step in savate ring but only few of them are real savateurs. And remember this - savate is not when you fight under savate rules.

If you want to buy DVD - it costs only 13 Euro and you can find it here: http://www.imineo.com/extrait.php?movie=6229

GB7 Marseilles. Shin kicks allowed - is motto of new born discipline in savate. Like professional sport - this discipline will be more attractive than all other bare foot sorts of kickboxing. Shoes are advantage in fight and martial art world will find out what these words mean very soon.

Nice part of savate training called savate forme. Like tae-bo but performed with more boxing and kicking techniques. Music? Of course, don't forget it. This is part 4 and we expect more, more and more.

From 1908 to 2008 Genova italian school of savate uses the same sport techniques, chasse - croise like later Bruce Lee did. I think that this Italian school is one of the oldest in Italy although there are several Golden gloves like Manusardi, Mameli, ... Remember great fighter Nocentini who fought Panza, Paturel, May, and many others.

Hungarian TEAM in their gym in Budapest. Well equiped and highly motivated they prepare competitors for combat and assaut matches. You can find them on http://www.savate.hu and ask them about their interview you see below. 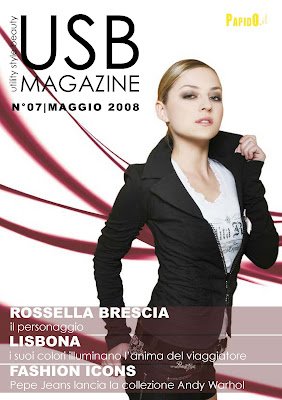 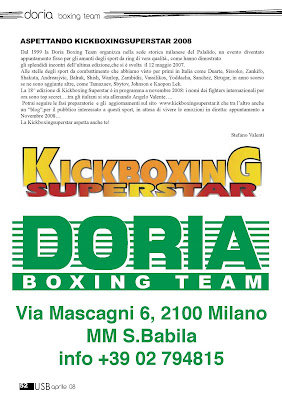 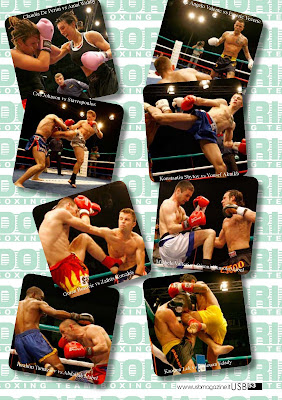 A big step forward for our sport!

The President of the International Savate Federation, Gilles Le Duigou, would like to express his thanks to all those who worked on the FISU bid:
"The two photos speak for themselves, at the Executive Committee of the International Federation of University Sport (FISU), he has presented an excellent case for the candidature of the city of Nantes (France) to organize the first official World University Championship of Savate in 2010. From this day, Savate is an official sport of FISU! Thank you Alexandre, you were the brilliant final voice of a file that testifies to what we can achieve together.

My thoughts and my thanks go also to the devotion and the passion of the many people who worked on this candidature, my recognition goes also:

- To the City of Nantes, supported by Alain Guillard, Franck Legoff and Bertrant Gautier, who always believed in this plan, for the excellent file of this candidature and for their work;

- To Valérie King and Neil, her husband, who worked hard on the translations into English of the candidature file;

- To Julie Gabriel and the British Federation, for the translations, their ability in communication and their support;

- To Collette Andrusyszyn, regional director of university sport, who organized the first University World Cup of Savate in Lille (France), in 2005, and who showed us the way;

- To President Serge Boulonov and the Russian Federation, for their support, the supports in the University world and their offer to organize a World University Championship;

- To the President Miodrag Rakic and the Serbian Federation, for their support, and their rapid response to show that savate is practiced in Serbian Universities and that the Serbian National University Championships will be officially recognized in 2008 (the Serbian representative within FISU is also the person in charge of combat sports);

- To the President Joseph Scholz and the American Federation for their support, likewise to Barbara Marry;

- To the President José Savoye and the French Federation of University Sport, without whom the candidature file of Savate could not have been submitted, and also because they believed in the success of our candidature;

- To the President Alain Piette and the Belgian Federation, for his contact work with the FISU, enabling me to present the file of candidature of Savate in January 2008 at the headquarters of FISU in Brussels, in the presence of Mr Walnier;

- To Alexandre Walnier who understood, from the first days, the importance of this candidature, for his contacts with the people able to help us with the recognition of Savate within FISU, for his work representing Savate in China and for the quality of presentation of the file, for his love of Savate.

On behalf of all Savateurs, thank you to everyone, and thank you Alexandre for this success.

We won a first victory, because this was the result of the work of a lot of people, we should understand that we will only gain by working all together, for there are other candidatures (on which we already work) awaiting us: The African games, the Mediterranean Games, the games of the french-speaking world, the Asian games, and especially on the file that is my principal objective: the recognition of Savate within AGFIS.

Savate deserves recognition within the international athletic movement! FISU have given it to us!

It was with much emotion that I welcomed this news, more than my victories in combat in my youth, for I know that I share this victory with many Savateurs around the world."
Avtor French boxing ob 12:43 AM No comments: