Did anybody see this master of savate attending any official FIS savate tournament? 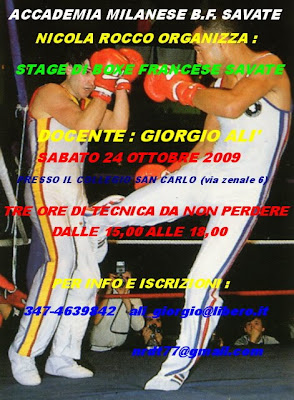 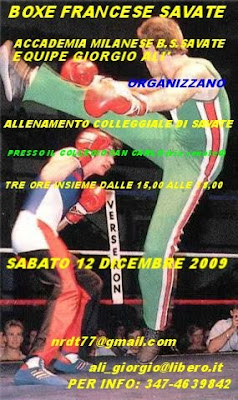 In Croatia there will be substitution beetwen FISU savate and K1 discipline in university sport .Do you know a country with National Olympic Committee member where all this could be possible? YES. Every Balcan country including Slovenia. Wonderland.
Avtor French boxing ob 9:47 AM No comments:

Manuela Massari - I don't understand why - called "The Witch"

and from history to these days:

Friends were month ago in Berlin. Boat trip.
And if I don't find at the moment the right words - I can just mention savate seminar in Germany. 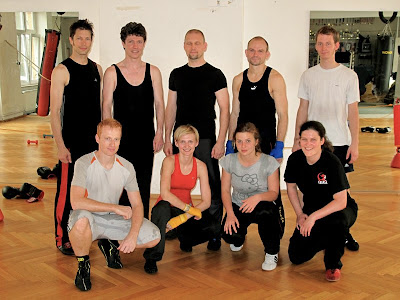 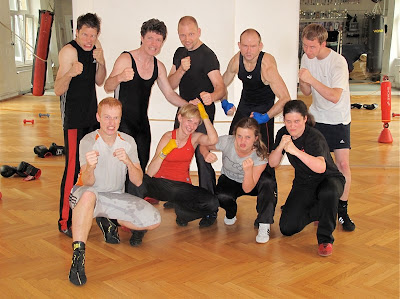 Canne de combat on a windy beach - sparring with father

WHY ALL THINGS CONNECTED WITH MARTIAL ARTS BEGIN AND END IN CANADA?

NOTICE OF EWuF CONGRESS: The EWuF Congress 2009 is planned for the morning of 24th October 2009 in Toronto Canada, exact time and place will be notified to you soon. Proposals or motions to be presented at the EWuF Congress must be sent to the Direct General and received before 23rd September 2009 for inclusion on the agenda. Only proposals sent by the President or Secretary General of a current “Active Member” can be considered.
Avtor French boxing ob 8:16 AM No comments:

THIS GUYS WORKED TOGETHER IN BELGIUM "BELGIYSCH" OLYMPIC COMMITTEE? LIKE AN OLD FRIEND OF SAVATE SPORT WALNIER? 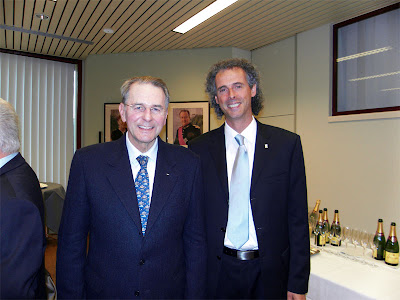 On September 4th the IOC President was attending a Belgian Olympic Committee event, our Director General Patrick Van Campenhout met the IOC President on this occasion
Avtor French boxing ob 6:50 AM No comments:

I hope that all of you had a very good holiday time. During this holiday there were some big events going on. The 2009 World Games had place from July 16-26 and some 31 sports were participating in this very big event. Some 5000 athletes from 103 countries took part in the competition in Kaohsiung. The Organising committee had recruited 6000 volunteers and there were some 280.000 visitors on the different venues all over Kaohsiung.

For the first time Wushu was presented as an demonstration sport, this is a very important step for Wushu. This is the result from our lobbying during the last years in Sportaccord meetings. The next step is the application to become a full sport in the World Games. Next year in April we will have the next Sportaccord meetings and also the International World Games Congress. During this General Assembly a new executive committee will be elected and the agreement of new sport federations and sport disciplines will be discussed. The World Games are always considered as the "anti-chamber" of the Olympic programme.
The World Games editions are every 4 years, the next World Games are in 2013 in Cali, Colombia. Let's work hard to be accepted by the IWGA as a full sport on the programme. 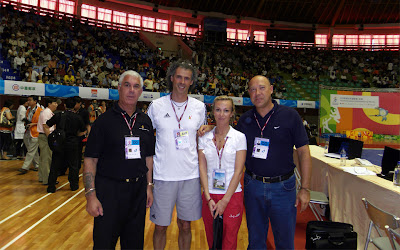 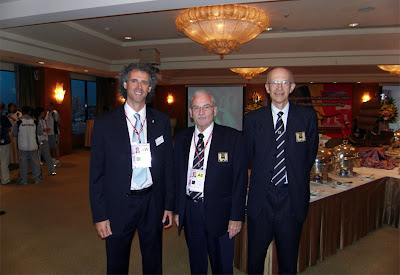 Demonstration of savate in Evry, France 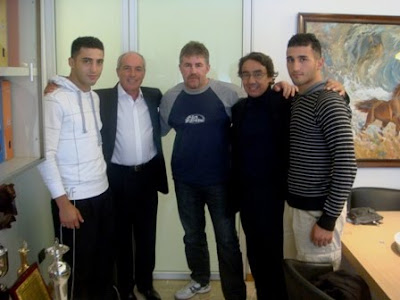 And who said that names are just names - just to cover the same players behind?
Avtor French boxing ob 2:51 AM No comments:

I WONDER HOW ASIAN EMBASSIES ARE MORE EFFECTIVE IN LOBBYING THAN THOSE OF EU COUNTRIES.

On September 4th 2009, Mr. Patrick Van Acker, President of the Belgian Kickboxing & Muaythai Organisation (BKBMO), a member of IFMA together with Mr. Karl Lauwen, President of the Thai-Belgium Association paid a visit to H.E. Ambassador Pisan Manawapat, at the Thai Embassy in Brussels.

Mr. Van Acker discussed the development of muaythai in Belgium and told the Ambassador that he aimed to popularaise the sport to the Belgium people as it is a sport which blends together the Thai culture and traditions. He also conveyed to HE the Ambassador that muaythai is yet to gain recognition from the State Government of Flander, due to their judgement that muaythai is a violent sport. It is because of this that the BKBMO are having difficulties in obtaining monetary support from the government to participate at International events such as the IFMA World Championships and the 2010 Sportaccord Combat Games.

H.E. the Ambassador agreed to help to lobby with politicians and the Minister of Sport, to ask the media for help in publishing stories to help promote muaythai as a martial art rather than a violent blood sport.

This cooperation will endorse muaythai as a beautiful art form which reflects the respect each athlete has for his or her teacher as well as for one another. The Thai embassy in Belgium also sees it as a way to develop and nurture Thai-Belgium relations.

The embassy have proposed some projects specifically geared towards these aims pending the grant for funding from Bangkok. These projects include inviting a minister or politician with decision making authority together with some Belgian muaythai athletes and Belgian media to travel to Thailand, inviting Thai muaythai trainers to train Belgian athletes for a duration of one month and focus on the traditional aspects such as Wai Khru and arranging for representatives of the BKBMO to visit the Belgian Embassy in Thailand to lobby for the Belgian Embassy to support the cause.

We wish our Belgian member federation the best of luck and continued support in the goal of gaining recognition from their highest sport authority in the near future. 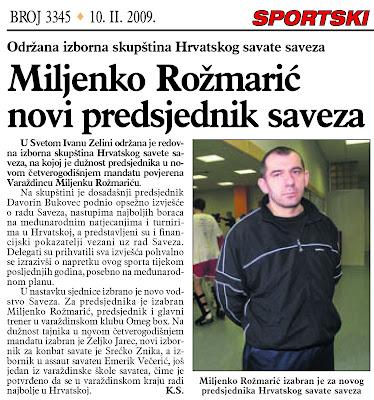 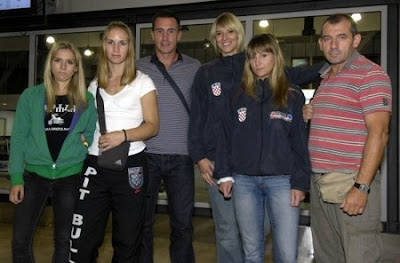 President of Savate federation Croatia Mr. Miljenko Rozmaric - selector of woman team - english boxing federation of Croatia was probably dissapointed.
No VISAS were obtained for both fighters. (Or maybe this was just a smart decision? kickboxing - savate - boxing internal problems?)
And they were prepared for European woman boxing championship - 2009 (Ukraine) but police had another strategy.

What is the moral of this story?
Don't mix savate - french boxing with other combat sports (and especially not with english boxing) - in other case you will go in jail.

The Bulgarian authorities have ordered an investigation after the same six numbers were drawn in two consecutive rounds of the national lottery.

An official of the Bulgarian lottery said manipulation was impossible.

A mathematician said the chance of the same six numbers coming up twice in a row was one in four million. But he said coincidences did happen.

Minister of Physical Education and Sport Svilen Neykov said the commission established to investigate would provide answers towards the end of the week.

The lottery organisers described it as a freak coincidence and pointed out that the numbers were drawn in a different order.

Nobody won the top prize in the first draw.

But a record 18 people guessed all six numbers in the 10 September draw.

Savate old cousin Moring is getting better and more realistic. If Rio de Janeiro - Brasil won Olympic Games everything will change in martial art world. Capoeira and all ground fighting kicking styles will start with competition activities. Can you beleive me?

Jogo do Pau will you join savate after/before AGFIS inclusion?

If you are a beleiver then it's all true...

Six intrepid athletes travel the world to compete against the most remote tribes on earth at their own sports. The world's most brutal form of stick fighting. It's insanely dangerous; no outsiders have ever before taken part. The idea is to use a seven-foot pole to knock your opponent down, draw blood, or make him give up. As far as the rules are concerned, that's about it.

Savate almost with both feet in AGFIS

FIS president is pleased to inform you that the International Savate Federation submitted its application for membership of SportAccord (AGFIS) this summer. The final decision will be made at the time of the SportAccord General Assembly in April 2010 - Dubai. Let us continue to work together with enthusiasm for the future of the Savate.
Avtor French boxing ob 9:39 AM No comments:

Seminar in Iran 6th of september 2009

At the 2009 world championship tournament in Serbia in June, the Serbian anti-doping agency tested a selection of 5 men and women athletes. The FIS is happy to announce that all results were negative.
Avtor French boxing ob 9:30 AM No comments:

Whatever happens in this brave new world it is a product of a strong plan from the past. China's birth regulation was possible, Europe's immigration was possible like the US immigration beetwen world wars. But the producer of that kind of scenarios in the the past will never be reveiled. Only people are always guilty. Small people.
Avtor French boxing ob 9:16 AM No comments:

But their domain expired. Yes, they worked hard and serious and now you can see that Olympic movement is still alive.
Avtor French boxing ob 6:48 AM No comments:

Mr.Ching-kuo Wu knows what savate is?

This is an occupational surname recorded originally in its various spellings in France, Italy, Spain, and Rumania. The derivation is from the Old French word 'savate' meaning slipper, the surname being a metonymic or nickname for the maker or seller of shoes and slippers. There are at least thirty spelling forms ranging from Sabattier, Savatier and Sabatini, to Zapata, Zavitteri, and Ciobutaru. Occupational surnames, unlike those of habitation, were not originally hereditary, and only became so when the son followed the father into the 'family business'. Most of the derivations of the surnames and the most popular forms, are themselves patronymics. In this case examples of the surname recordings taken from authentic church and civil registers include Antonio de Munea Zapata, christened at Albacete, Spain, on June 11th 1609, and Abraham Savatte, born at Marck, Pas-de-Calais, France, on January 1st 1649. Francois Savatier was christened at Vaux-sur-Vienne, France, on June 26th 1749, and Clara Zapater was married to Bernardo Calbo, at Santa Maria, Tudela, Spain, on January 6th 1760. The coat of arms has the distinctive and appropriate blazon of a gold field, charged with a red shoe fesswise. The first recorded spelling of the family name is shown to be that of Andres Cabellera Zapatero, which was dated April 12th 1588, born at Villa de Esqueva, Valladolid, Spain, during the reign of King Phillip 11 of Spain Emperor of Mexico, 1556 - 1598. Surnames became necessary when governments introduced personal taxation. In England this was known as Poll Tax. Throughout the centuries, surnames in every country have continued to "develop" often leading to astonishing variants of the original spelling.
Avtor French boxing ob 6:54 AM No comments:

The FIS President would like to inform member countries that there is currently no president of the Asian Confederation. There will be a congress of Asian member countries to elect a President and Board Members. Meanwhile, an Acting President has been appointed to organize the congress - he is Mr HamidReza Hesaraki, who is President of the Iranian Savate Federation, which is based in Tehran and recognized by the Iranian authorities. In addition to organizing the congress, Mr Hesaraki has been asked by FIS President Gilles Le Duigou to begin the organization of the 1st Asian Savate Championships - provisional arrangements have been made for the championships which will probably take place in 2010 in Thailand. Further information will follow.
Avtor French boxing ob 7:34 AM No comments:

The Mexican Savate Federation is pleased to announce the opening of the Queretaro State Savate Association AC. It is the first University-based association in Mexico, and has been set up to encourage women to participate in Savate.
Samuel Ramos recently gave a seminar there and awarded grades to 18 participants. Although it is a 7 hour drive for Samuel, he intends to support them with regular visits, and is convinced that they will enter a team in the University World Championships in Nantes.

When savate breathes as a system in a real situation